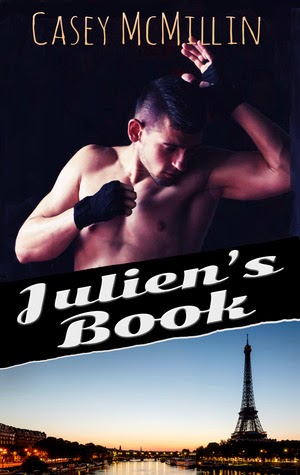 Review:
I received an ARC from the author for my honest review.

Let me start off by saying that I was nervous and a little skeptical to read this one as the author noted that it was different from her other books but I was pleasantly surprised how much I loved this one. So don't worry it is still a new adult love story with all the bells and whistles we love.

I feel like lately the books I have been reading all have the same story so getting to read this one that had such a new creative concept I was having a hard time not rushing the story because for once I didn't quite see where this was going.

Julien is a training to become the next greatest MMA fighter (so yeah hot, muscular and over course protective!!) when he catches the eye of an author who is captivated by his appearance featuring his unique birthmark he is all up for being her next muse. What he didn't expect was for an onslaught of girls coming to the gym pretending to his true love, Nadine. After a while the guys at the gym made a game out of every girl coming in claiming their name was Nadine and would come up with some reason for the girl to show ID proving the lie. Once the girls figured out they would eventually have to give their real names they would never come back.

Like with anything hype eventually died down at the gym and he was back to training his regulars until another Nadine shows up taking the charade a little too far, not matter what he did he couldn't get her to break character and admit she lied.

I really don't want to go into any more details about the story because I feel like each reader should get the pleasure of experiencing it unfold for themselves. Such a great concept from the author and  I am not so secretly hoping this becomes a series!!
Posted by Nichole McNamara at 9:07 AM