Three Months and You're Mine by Casey McMillin 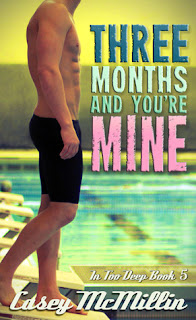 Three Months and You're Mine by Casey McMillin

Review
I received an ARC from the author for my honest review.

Let me start off by saying that I have been a fan of this series since the start but now I am torn to which book is my favorite!

Great fast paced story for those of us obsessed with New Adult books!! It has romance, lust, a girl figuring out what she wants in life and of course a hot guy with abs!!

This story follows Meredith (Collin's sister) and Zack and I just really liked how their story developed. From the beginning it was obvious that they had chemistry but they had a forbidden love thing going on as Zack is one of Collins best friends and has quite the reputation with the ladies.

Zack being the self proclaimed lifetime bachelor was not exactly mortified when Collins little sister, Meredith, texts him asking him to help her gain experience sexually without any strings attached but was hesitant as he knew Collin would just about kill him if he ever hurt his sister.

In Zacks mind he had the perfect soultion; tell her that she had to wait three months to make sure it was what she truly wanted. There is no way she will wait that long so he will be off the hook and now he doesn't have to say no and hurt her feelings.

Which was a great plan until she moved out to LA and was around all the time and he found that he might not be able to resist her as well as he originally thought.

At first they both they both tried to keep it almost like a business deal; Zack continued to encourage Mere to date and find someone who she actually liked to teach her and Mere actually taking that advice and trying to fall for someone.

Throughout the story Meredith went after whatever she wanted and was confident in herself. I feel like in most stories girls can be kind of annoying and always need a knight and shinning armor so it was like a fresh breathe of air.

The continuation from the other stories was also perfect in this book; It let me keep track of what was going on with everyone in the past stories that I fell in love with without losing who the story was actually about!

Ugh I don't know about anyone else but I am developing a thing for swimmer after this series ;)
Posted by Nichole McNamara at 12:33 PM

Email ThisBlogThis!Share to TwitterShare to FacebookShare to Pinterest
Labels: Casey McMillin, In Too Deep, New Adult, Romance, Three Months and You're Mine