Second String (In Too Deep #3) by Casey McMillin 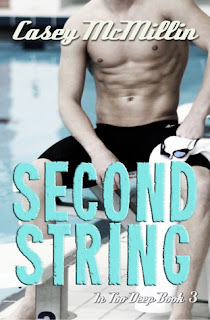 Second String (In Too Deep #3) by Casey McMillin

Review
I was so excited when I got an e-mail tonight from the author about the release tomorrow and even better than that she sent me the book! Although this author did send my the book the review is my honest opinion of the story.

And let me tell you it did not disappoint. So the focus in this book was on Emily and Ethan while of course keeping in touch with the characters from the first two books.

Emily and Ethan share a strong attraction to each other but are determined to keep things casual as Ethan is a well known ladies man and Emily is waiting for her high school sweetheart to get his act together and finally be with her the way she has always dreamed of.

Although they live hours apart they seem to find any reason to be near each other and can't seem to fight the chemistry between them. Ethan and Emily are both a little guarded as they are heading into unfamiliar territory but can't seem to help themselves. At least not until the past threatens to ruin everything.

I also felt a little bit more connected to this story as I could relate to Emily's struggle to figure out who she truly is now compared to the vision she had of herself growing up.

Whew! Overall I loooved this story! I was a little skeptical because again I just wanted more from the previous books but Ethan and Emily hooked me in just as much as Rachel and Gretchen, I was so sad when it ended I just wanted a little bit more.

At the end it did suggest a fourth book was coming our way. I don't know any details but  if i had to guess I would probably say it will be about Josh (Ethan's roommate) but who knows!
Posted by Nichole McNamara at 12:26 AM

Email ThisBlogThis!Share to TwitterShare to FacebookShare to Pinterest
Labels: Casey McMillin, In Too Deep, New Adult