Unbreak Me by Lexi Ryan 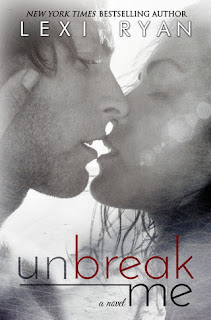 Unbreak Me by Lexi Ryan

The story starts as Maggie just came back to town after running away about a year prior.

Maggie comes home to attend her sisters wedding. The problem is that her sister is marrying her ex-fiance (Will) forcing her to face her past head on.

As the story unfolds we start to understand more and more what led to Maggie running off. Will from the start is very obviously still in love with her and will do anything to help Maggie be herself again.

At first is seems like Maggie really wants a life with Will; that is until she really gets to know Asher. Asher is very similar to Maggie; facing a troubled past of his own. Where Will attempts to fix her, Asher lets her fall apart and be herself.

The story hit some really serious topics and at times I felt so bad for her and I couldn't imagine dealing with what she had to but then other parts of the story were just unrealistic.

For example throughout the book it says how every bit of Asher's life is in the tabloids but not once does that come into play in their relationship. You would think that at some point the paparazzi would be following him especially when things pick up a little.

Overall a quick fun read but it wont be making my top ten books anytime soon. I can't quite put my finger on it but it was missing something, I just felt like as much as the character went through I should have cared more than I did.
Posted by Nichole McNamara at 7:55 PM