Girl on Tour by Caisey Quinn 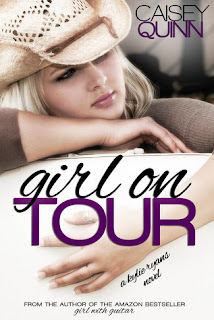 Girl on Tour by Caisey Quinn

Cant get enough of this series! To say that I will go crazy waiting for next book in february would be an understatement!

This is a great continuation from the first book! If it is even possible I love the characters even more than I did in the first book. I have to say this author is growing on me very quickly! Just put another one of her books on my kindle!

So the story starts where the second book ends; Kylie is getting all set to start on tour with two other girls. While Kylie is focusing on her tour Trace is working on fixing his reputation and his addiction to alcohol. They are still crazy for each other (so yes right off the bat you get some steamy scenes similar to the ones we loved from the first book!) and are dreading being away from each other for so long.

During their time apart Trace is on tour with what Kylie likes to call the girl version of him which naturally puts her at unease as she is concerned about his past relationship with her. While constantly worrying about Trace she also has a few of her own problems; her two tour mates are not exactly good friends making the bus a little tense.

Tension runs high between the two of them as the past is threatening to ruin their future.

So I don't want to give anything away so I will leave it at that. If you liked the first book you will not be disappointed with this one!

The next book will be titled, Girl In Love, which will is set to be released sometime in January 2014.

Posted by Nichole McNamara at 6:18 PM